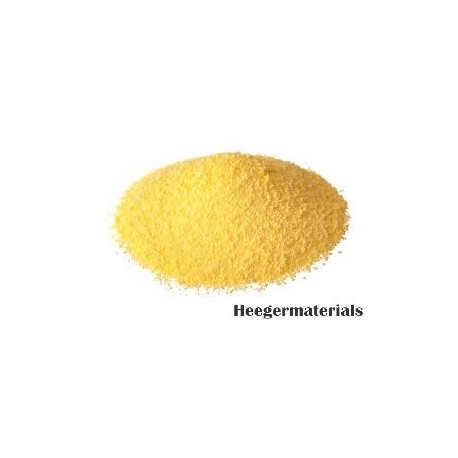 The main use of sulfur minerals is the production of sulfuric acid and sulfur. Heeger Materials offers sulfur of high quality and at a competitive price.

High-purity and ultra-high purity Sulfur (S) materials are crucial components for the research, development, and production of advanced technologies which require optimum properties, performance, and quality.

Usually monolithic sulfur is a yellow crystal, also called sulfurous sulfur. There are many isomorphs of sulfur mines, including oblique sulfur, monosulfur, and elastic sulfur. Sulfur exists in the form of sulfide, sulfate, or monolithic. Sulfur is hardly soluble in water, slightly soluble in ethanol, and easily soluble in carbon disulfide.

Sulfur is important in industry, such as sulfuric acid in a battery or in a solution. Sulfur is used to make gunpowder. Make a vulcanizer in the rubber industry. Sulfur is also used to kill fungi and use as chemical fertilizer. Sulfides are used for bleaching in the paper industry. Sulfates also have a use in fireworks. Sodium thiosulfate and ammonium thiosulfates are fixed-film agents and fertilizers in photography.
Manufactures of sulfuric acid, sulfite, pesticides, plastics, enamel, synthetic dyes, rubber vulcanization, bleaching, drugs, paint, sulfur ointment, etc.

The main use of sulfur minerals is the production of sulfuric acid and sulfur. In addition to chemical fertilizer used, sulfuric acid is also used to make more than 90 chemical products such as phenol and potassium sulfate, bicycle and leather industry of light industry system, adhesive, fiber, vinilylon of textile system, steel pickling, and fluoride production department of metallurgical system, crude oil processing, petroleum catalysts, additives, and pharmaceutical industry are inseparable from sulfuric acid.

High-grade pyore slag can be recycled from iron; low-grade slag can be used as cement ingredients. Slag can also recover a small amount of silver, gold, copper, aluminum, zinc, and cobalt. In addition to the raw material for producing sulfuric acid, sulfur is also widely used to produce chemical products, such as copper sulfide, sodium pyrosulfate, etc. In addition, in sugar production, sulfur into sulfur dioxide gas for bleaching and declination. Sulfur is used directly or indirectly in pesticide production; carbon disulfide shall be used as a solvent in adhesive fiber production; agents selected for metal sulfide shall be carbon disulfide as a raw material; in addition to the above applications, sulfur consumption match manufacturing, cement pillow treatment, medicine, etc.
Sulfur is used to make black gunpowder, matches, etc. Sulfur is also an important raw material for producing rubber products. Sulfur is also used to kill fungi and use as chemical fertilizer. Sulfides are used for bleaching in the paper industry.

Block, granular sulfur can be stored in the open air or in a warehouse. Powder, sheet sulfur is stored in a covered place or warehouse.
Bagged products are stacked with the access of 0.75m wide. Do not be placed near the upper and lower water pipes and heating equipment.